Advanced Glycation Endproducts (AGEs) comprise a large group of damaging compounds that result from biochemical glycation and oxidation reactions. Sustained glycation and AGE intake can lead to a AGE accumulation in tissue. AGE accumulation in tissues compromises those tissues and has been related to most lifestyle conditions and to premature aging. Active management of diet and lifestyle can slow or even reverse the glycation process.

There are many different AGEs present inside the human body. The following overview shows the chemical structure of several common AGEs. 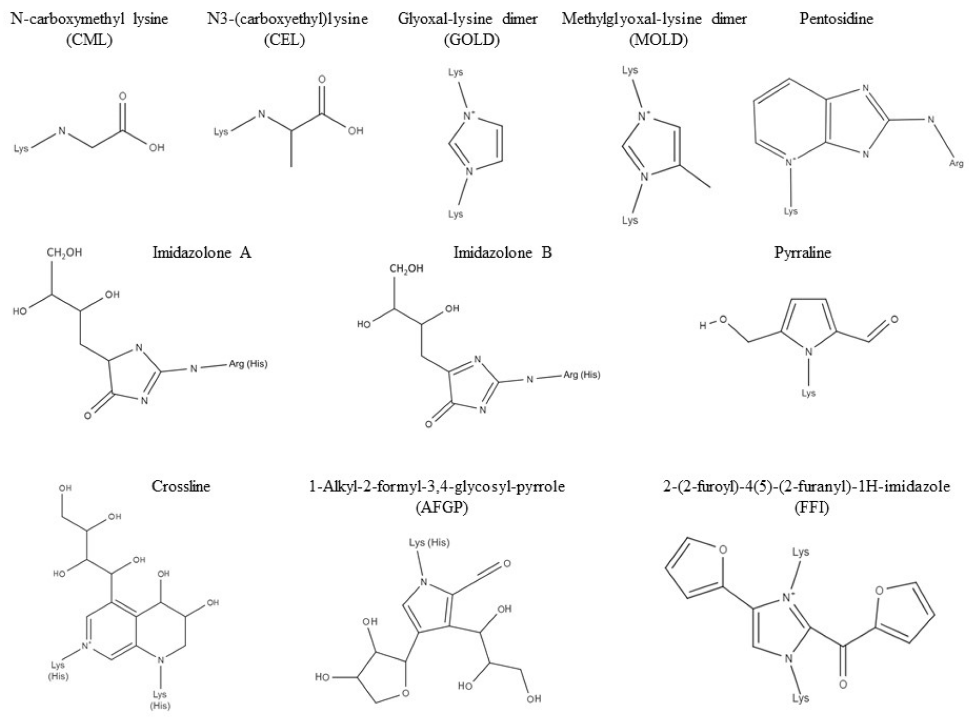 Quote: ‘studies provide strong evidence that intake of a diet with a high AGE content is a major determinant of systemic oxidative stress in healthy adults’ – from Vlassara et al. 2009 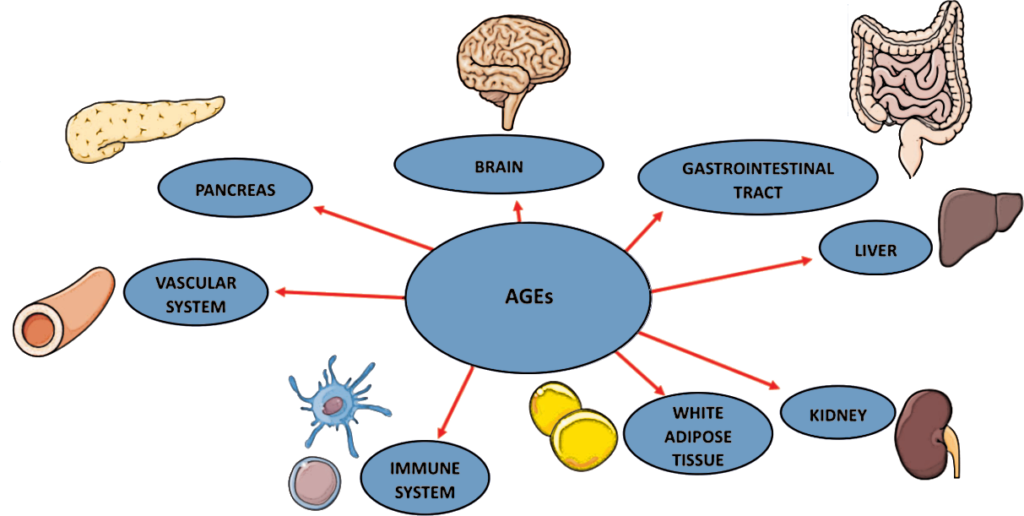 Figure: Parts of the body affected by glycation

An important second source of AGEs are endogenic AGEs. These are AGEs that form as a result of glycation and oxidation reactions that take place inside the body. These reactions include the well known Maillard reaction as well as dicarbonyl reactions and occur especially during periods with a high availability of sugars. The related oxidation reactions also involve dicarbonyls and further amplify the amount of endogenous AGEs. Each of these internal reactions directly affect the structure and function of body proteins, lipids as well as DNA. Glycated insulin for example hampers sugar uptake by cells.

Reducing the sources of AGE is of prime importance in managing glycation in healthy people. A third cause of an increased level of AGEs is the failure of anti-glycation defenses inside the body. Examples of these defenses are the so-called AGER-1 receptor on cell surfaces and the better known soluble receptor for AGEs (RAGE). A final, fourth cause of increased AGEs is simply a lower excretion of AGEs because of a decrease in kidney function.

All of the above mentioned sources lead to an accumulation of AGEs within cells and in organ tissues with age. In this way the current level of AGEs in tissue is effectively a ‘personal memory’ of the glycometabolic stress experienced during once’s life. Besides this the accumulation of AGEs is a known basic mechanism for (accelerated) aging. 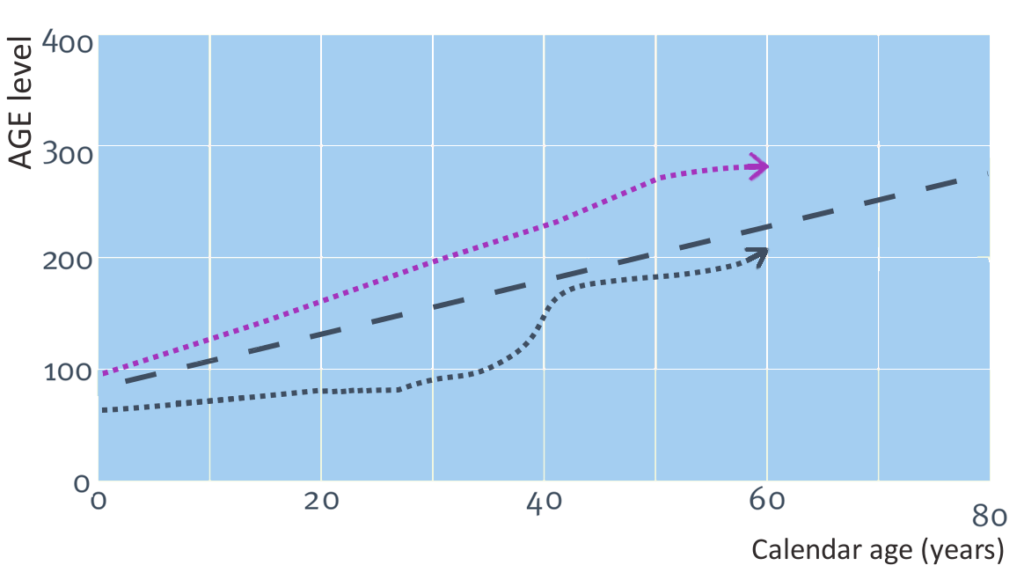 A high glycation level can occur in many parts of the body, including the blood, blood vessel walls, retina, lens, kidney, brain, peripheral nerves, joints, and skin. Glycation compromises body tissues including organs through three separate modes of action:

Crosslinking of AGEs on proteins and other biomolecules leads to tissue damage. This occurs especially in long lived tissues such as the collagen matrix. This results in an increase of rigidity and a loss of elasticity. Tissue function can be further compromised as glycation continues, affecting the health of bone, skin, heart and brain, among others.

Every step in the glycation process, from the preliminary stages though to the intermediate steps and all the way up the final phase, generates free radicals and promotes oxidative stress. Furtmermore by stimulating cell surface receptors such as RAGE, AGEs are a major trigger of inflammation. AGEs actually operate as an amplifier of these harmful processess.

Glycation can also irriversibly damage a cell’s DNA and mitochondria. This compromises cell health and its energy availability.

It is not just the longterm accumulation of AGEs that compromises health; the average daily dietary intake of AGEs in adults is already considered to be high and unhealthy by scientists. In many people at some point in their life the level of AGEs may reach pathogenic levels.

Until now it has been complicated to manage glycation because of a lack of feedback on the glycation status of the body. Existing methods to measure tissue AGEs in people require laboratory work and are very expensive, time consuming, lack specificity, are poorly reproducible and are invasive.

The AGE Scanner is the answer to measuring AGEs without the disadvantages of the existing methods and to start managing glycation. The product is an easy-to-use and non-invasive solution that allows professional users to determine the overall AGE level in 12 seconds. This data can assist you as a professional in prescribing the right lifestyle intervention and help support and motivate your clients make healthy choices.

Thanks to many excellent nutrition research studies there is now an extensive literature on managing glycation. In general, an increase in tissue glycation can be prevented by significantly reducing its sources. A low AGE diet is well known to reduce inflammation and oxidative stress [1] and to improve metabolic risk factors [2,3]. Once the reduction in AGE intake is maintained across a sufficiently long period (months) the glycation level of tissue stabilizes or even lowers, and a long-lasting health effect may be expected.

A number of the known methods for targeting glycation are well summarized in the following review publication by Karly Souris and co-workers: Handbook of Experimental Pharmacology.

Related pages
About the AGE Scanner
About validation
Age Apps
Return to home
These statements have not been evaluated by the US Food and Drug Administration.
This product is not intended to treat, cure, prevent or diagnose any disease.